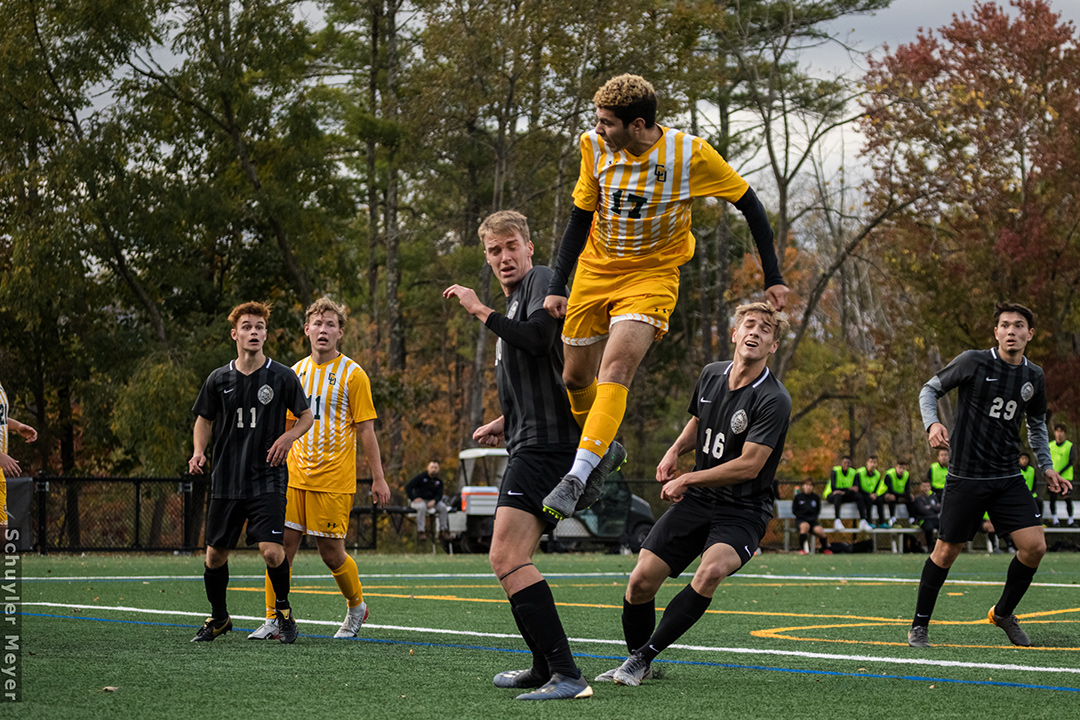 This past weekend, Clarkson Men’s Soccer traveled to the Hudson Valley to play two games – one each against Bard College and Vassar College. The Golden Knights were undefeated in Liberty League play coming into the weekend and were looking to continue the winning charge.

Friday’s game was held on the beautiful Bard campus in Annandale-on-Hudson, during peak fall season, with the leaves showing their vivid reds, oranges, and yellows, which provided a nice backdrop to the 90-minute game.

The game itself in a summary, was very lopsided in favor of Clarkson. It seemed throughout the 90 minutes, Clarkson had control of the ball for about 80 minutes of it. Bard was able to pulled themselves together for a short time in the second half, but ended with no goal to show for it. The final score was 3-0 Clarkson, improving their record to 8-3-2 (4-0-2 in league play) and Bard fell to 1-11-1 (0-6-0 in league play). Clarkson’s goalie, Senior Ian Roeloffs fought to his fifth straight league shutout. The goals for Clarkson were scored by Freshman Michael Tocci (assisted by Junior Matt Adamou) in the 32nd minute; Freshman Devon Bahr in the 60th minute; and Freshman Joey White (assisted by Senior John Furcick) in the 72nd minute.

Despite the seemingly excellent play by Clarkson throughout the game, head coach Carter Lincoln seemed to think there was still some areas that could be improved, after briefly speaking to him after the game. But from the perspective of a semi-experienced player (I played up until college – about 15 years), I thought that was some of the best soccer I had seen in a long time (given I don’t watch a lot of soccer…). Nevertheless, that’s probably why he’s the coach and I am not.

One more piece to point out, Clarkson Sophomore Bobby Guilfoil was especially noticeable in the second half. Along the left wing, he continued to get pass after pass, which he would in turn make a run down to the corner giving Clarkson numerous scoring chances. The Bard defense just could not stop him.

The Vassar defense the next day, however, was more than prepared for Guilfoil’s runs, only allowing him a few late in the game.

Vassar College, situated in Poughkeepsie, NY, possesses another nice campus, albeit a little more urbanized than Bard. The mid afternoon game gave way to a no clouds in the sky, beaming sun type of day, which can be either amazing or awful for photographers depending on a few other factors.

The game itself, in summary, was another lopsided game, but in favor of Vassar this time. When Clarkson did get control of the ball, Vassar’s defense did not allow them to get through. Despite the seemingly one-sided control game, both teams were even in shots at 13 a piece, though Vassar was able to find the back of the net two more times than Clarkson for a final score of 3-1 Vassar. This ended Clarkson’s unbeaten league streak for an updated record of 8-4-2 (4-1-2 in league play) overall and Vassar moved to 7-6-1 (4-2-0 in league play) overall.

Senior day for the two Vassar seniors, seemed to propel them throughout the game until the final 10 minutes where Clarkson’s stamina outlasted Vassar’s and promptly ended the chance for a shutout when Sophomore Bobby Guilfoil scored on a free kick in the 83rd minute.

Clarkson plays next on 10-26 at home against RPI.