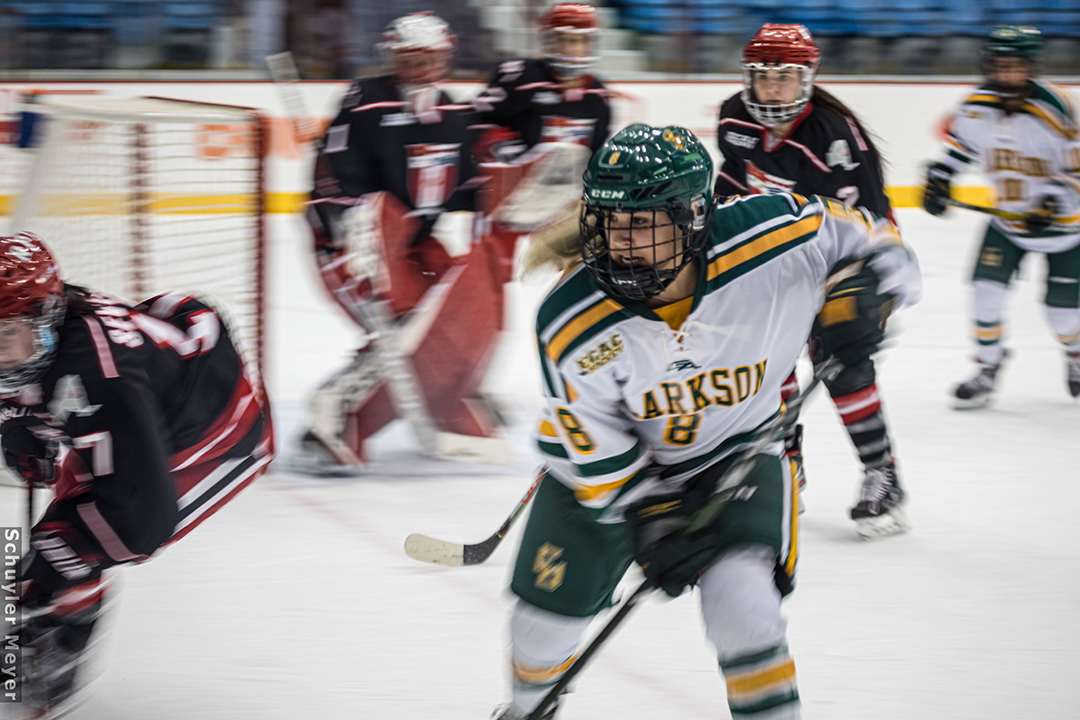 RPI’s rink, the Houston Field House, located on RPI’s campus in Troy, NY is quite a beautiful rink. It reminded me of an airplane hangar in which they decided to place some ice on the ground and never ending bleachers on either side. There is some nice natural light coming in from the big windows at the entrance and a pretty cool video scoreboard above center ice. There is also, to my mixed feelings, a big mesh with one of RPI’s logos that stretches across the length of one end of the rink. On one hand it looks kind of cool and has the potential to look cool in a photo (in the background or whatever), but on the other hand, the mesh inhibits any photographer from photographing from a potentially prime location. But alas, it’s unique, I guess?

For the game itself, turned out to be a goal fiesta. 5-4 was the final score, with goals from both teams sprinkled throughout each period. Despite the offensive party, the game only entertained an abysmal 217 people. With a rink that can hold more than 4800 people (according to Google), it’s safe to say that there wasn’t much of a crowd. But thinking on the positive side, as a photographer, this gave me more freedom to roam around and try to capture some interesting angles and shots.

Regardless of the nearly even score, Clarkson entirely overpowered RPI in terms of shots on goal, peppering RPI’s Ena Nystrom with 44 total shots where as RPI was only able to place 15 total shots between Clarkson’s MP Coulombe and Amanda Zeglen.

Clarkson goals came from Gabrielle David (2), Elizabeth Giguere, Ella Shelton, and the game winner from Kristy Pidgeon. RPI’s goals were scored by Blake Orosz (2), Julia Blitz, and Sarah Bukvic – for the latter two, these were their first career college points.

Clarkson plays next on November 8th, at home against Colgate.